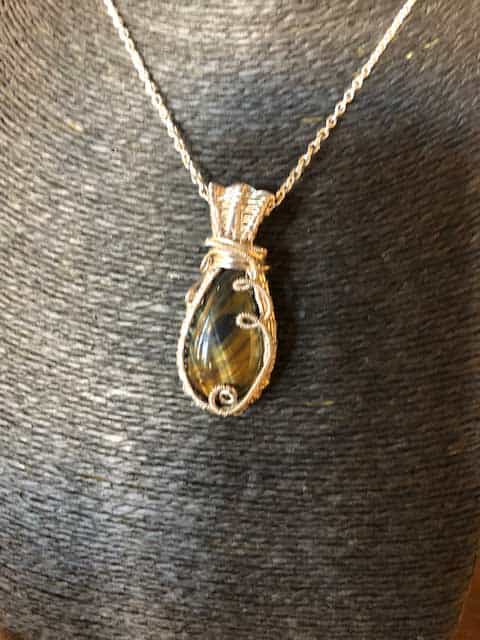 Susan Verdecchia grew up with a family that encouraged creative expression including music, art and writing. Her parents, grandparents, aunts, and uncles made certain she had everything she needed to create whatever she was into at the time.  She married her husband Vince in 1976 and they moved around the southeast with his employer, had a daughter and son, and ended up in Augusta in 1986.  In 2003, after their youngest left for UGA, Susan and Vince moved to Thomson from Columbia County, and have loved the life there ever since. They now share their home in Thomson with their adult daughter, three precious grandkids, a dog, three cats, chickens, guinea fowl and goats.   Never afraid to try new things and learn new skills, she found herself in her 50’s exploring exciting ways to showcase the natural gemstones she collected in handcrafted art jewelry.   Eventually, wire weaving became her passion, and she began to be accepted into art shows throughout the Southeast.  She discovered that her little town had an art gallery and joined Mac on Main.  She cherishes the support, encouragement and inspiration from her fellow artists at the McDuffie Arts Council and art lovers in the area.