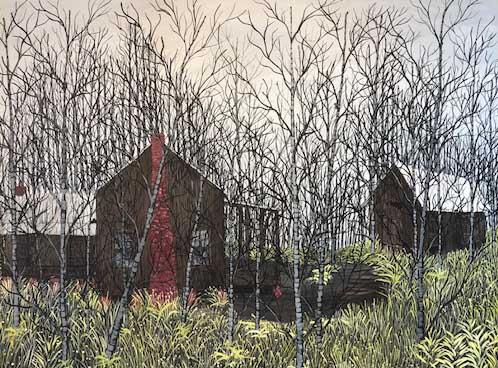 A self-taught artist who lives and works near Thomson, Georgia.

Murray’s brightly colored palettes depict scenes of his childhood home, his family, and the beauty of the rural landscape as he envisions it. Challenged by his battle with epilepsy and the polio virus, he found early and continued success in creating pictures.

Recalling a childhood memory, Murray fondly remembers drawing pictures in his mother’s freshly raked yard. About Murray and his work, Morris says, “He possesses a keen memory and a natural gift for storytelling that successfully translates into his paintings filled with rural landscapes and images of barns, children playing, and people engaged in the daily activities of rural life.”

Valton Murray grew-up in Mesena, Georgia and was a member of a large and loving family. Murray’s life-long career as a visual artist has led him to exhibit widely throughout the State of Georgia, and he has garnered national acclaim as an artist. Murray’s 2004 selection by VSA, The International Organization on Arts and Disabilities, to participate in its international festival and exhibition led him to further notoriety. Having exhibited in The Kennedy Center and featured in the House of Blues Collection, Murray continues to attract collectors and receive awards for his art.